Van-Leo (1921-2002) was Egypt’s premiere 20th-century studio photographer, his work spanning the late 1930s to the late 1990s.  Known as the leading portrait photographer for Cairo’s entertainment elite and other well-known public figures (such as Omar Sherif, Doria Shafik, and Taha Hussein), Van-Leo also pursued art photography, most notably in a series of inventive self-portraits.  His work also extended to producing commercial and travel images, as well as studio photography for everyday people, ranging from family and wedding portraits to passport photos.

Born Levon Boyadjian (but later going by the first name Leon), he was of Armenian background and moved with his family from Turkey to Egypt in 1924.  Levon’s primary and secondary school years were spent at Cairo’s College de la Salle (1931-1932) and the English Mission School (1932-1939), and he attended the American University at Cairo in 1939 and 1940.

Levon Boyadjian apprenticed with a commercial studio photographer before he and his brother Angelo opened their own studio in 1941 in their downtown Cairo family apartment. In 1947 Levon established his own studio, first named Metro Studio and later Studio Van-Leo, the name by which he would thereafter be known.

Prominent for much of the middle of the 20th century, the fortunes of Van-Leo’s studio eventually declined in parallel with changes in Egypt’s society and economy, downtown Cairo, and the photography profession, as well as his declining health and his aging.  In his later years, however, Van-Leo attracted renewed attention, for example through the 2000 Prince Claus Award honoring his career.  Since his death Van-Leo’s work and art has garnered continual recognition through exhibitions, books, and articles, often with content drawn from his collection materials at the RBSCL.

The Van-Leo Photograph Collection includes prints and negatives spanning Leon Boyadjian’s career from the 1930s to 1990s, along with works by and jointly produced with his brother Angelo from when they operated a studio together. The collection contains approximately 13,000 photographic negatives and 12,000 prints.  Images date from the late 1930s through the late 1990s.

Van-Leo began using color photography in the late 1970s and simultaneously continued to photograph in black and white.  Whether black and white or color, Van-Leo retouched both negatives and prints to achieve the perfect print.  He also hand-colored many of his black and white images. Prints in a variety of sizes may be found in the collection, as well as corresponding negatives.

The collection is notable for its portraits, especially those of famous figures in Egypt’s cultural and artistic life.  Beyond celebrity images, the bulk of the collection is made up of portraits of sitters from various walks of life, wedding and family photographs, and passport photos. Commercial and travel photography is also represented. A noteworthy segment of the collection is the set of hundreds of self-portraits Van-Leo made in the 1940s, often depicting himself in various disguises and personae.

Organization and Arrangement and Series Descriptions

The collection is organized into seventeen series, generally reflecting how Van-Leo organized his works:

Series 2:        Self-Portraits and photos of Van-Leo by other photographers

Series 2: Self-Portraits and photos of Van-Leo by other photographers

Van-Leo took hundreds of self-portraits starting in the late 1930s.  The majority of the self-portraits were taken in the 1940s and 1950s.  This series also includes several images of Van-Leo in his later years taken by other photographers.

Angelo Studio is the name of the portrait studio that Van-Leo (then Levon Boyadjian) and his brother Angelo Boyadjian started in their family home in the early 1940s.  The brothers worked together and signed “Angelo” to all of their images until 1947. Included in this series are some images of Egyptian film stars.

Women, or “Ladies” as he called them, formed a large part of the clientele of Van-Leo’s studio.  This series has three subseries. Celebrities “Stars” includes sitters ranging from leading artists such as bellydancer Samia Gamal to public figures like women’s rights advocate Doria Shafik. Entertainers contain images of less-renowned figures in Egypt and Cairo’s entertainment scene, some labeled with titles like “The Moroccan Dancer” or “Portuguese Nightclub Singer.” The generic Portraits subseries encompasses women from other walks of life photographed by Van-Leo.

his series also contains three subseries. Celebrities “Stars” contains a remarkable selection of portraits of notable 20th-century figures, including the first professional photographs of Omar Sherif, and portraits of leading figures in entertainment like actor Rushdy Abaza and singer Farid el Atrache. The subseries Military “Soldiers” depicts portraits of British and Egyptian soldiers. Photographs of other men may be found in the Portraits subseries.

Throughout his career, Van-Leo photographed couples for both their engagements and weddings.  Studio backgrounds varied, depicting a range of props.

This series includes portraits of couples taken throughout Van-Leo’s career.

This series contains family portraits as well as portraits of siblings, and child portraits (some with children dressed in military uniforms).

This series reflects a significant line of work for Van-Leo’s studio, covering a diverse selection of sitters. The images are mostly in color.

This series includes portraits of a variety of groups, such as soldiers or classroom portraits.

This series contains portraits taken after 1978, organized chronologically based on Van-Leo’s own arrangement.

This series includes advertising photographs of lamps and other home furnishings, dating mostly from the mid-20th century.

Van-Leo’s photographs of Egypt, and of foreign countries were taken while traveling.  Prints from a 1954 trip to Luxor and travel to Aswan and other Nile Valley locations, as well as Giza, are noteworthy for depicting ancient pharaonic monuments. Rural Egyptian landscapes and scenery are also represented in the collection. Images of Islamic architectural monuments in Cairo are also included, as are prints of architecture and street scenes of modern Cairo, Alexandria, Helwan, and elsewhere.

Van-Leo collected prints of Egypt produced by entities like Editions Photoglob and Editions Schrieder Zurich. This album includes both acquired prints and reproductions that Van-Leo made of the Photoglob prints.  Subjects include rural scenes, Islamic architecture, and people.

This series contains reproductions that Van-Leo took of images from magazines, or of works of art.  These include photographs of celebrities such as Abdel Halim Hafez, or of women.

This series consists of Van-Leo’s collections of postcards and cigarette cards of Hollywood movie stars, reflecting influences on his work.

This series includes Van-Leo’s scrapbooks and personal and family photograph albums.  These document his travel and gatherings with family and friends.

In addition to the corpus of his photographic work, the Archives at AUC’s Rare Books and Special Collections Library also maintains the archives of his personal and professional life. Holdings include:

This series contains several address and telephone books, probably compiled for both personal and business uses; one of these may have been started by one of Leon’s parents.  Business cards received from vendors, clients, and visitors are also included, as is an oversized box (stored separately from the rest of the series) of cards for clients of Angelo Studio.

This category encompasses documents from Angelo and Van-Leo in their joint studio (Angelo Studio), and by Van-Leo in his own studio (Metro Studio and Van-Leo Studio).  Contents include receipts for purchase of photography supplies, studio furnishings, and utilities, examples of stationery (including Van-Leo’s attempts to design a new logo), calendars, rental contracts for studio and display space; advertising material, and correspondence related to his business and legal matters.

Included is correspondence from Alice Boyadjian, sister, Angelo Boyadjian, brother, and Suzy Kabakian, cousin to Leon, his mother Perouz, and his cousins Hermine and Astgigh who lived nearby.  Letters from Alice to Leon berate him for not writing or calling and are full of advice for the good life.  Angelo’s letters, out of apparent concern for Leon, also give much advice, berate Leon for lack of business acumen, lambaste the bureaucracy in France where Angelo’s studio is located, and attack the various minorities in Egypt, Armenians excepted.  Of note among Angelo’s letters to Leon are a July 1969 letter mourning their mother’s death, a May 1981 letter advising Leon not to marry a woman he is interested in, and a June 1996 letter regarding the off-hand way Leon handled his cousin’s estate.

Van Leo kept much of his correspondence, including a large number of postcards.  Contained in this grouping are personal letters from friends from 1943 to 2000; there are no outgoing letters (or copies) sent by Leon.  Of interest are the three file folders of letters entitled “Girlfriends of World War 2” (including letters from a South African woman), “Girlfriends Correspondence 1950”, and “Girlfriends” (the latter two groups including women with nationalities like German, French, Canadian, Czech, etc.).

This series contains records of Van-Leo’s less than sterling academic performance in three different schools, including concerned letters from his father to the school, report cards, as well as several copy books and various assignments.  Also of note are his attempts at emigrating from Egypt to the U.S. through application to an art school in California, and to Canada, where his sister lived.  His legal documents include an identity certificate of his birth attested to by the archbishop of the Armenians in Egypt, an exemption from the military, certificates of attendance at the three schools he attended in Egypt, and a membership card from the Syndicate of Photographers.  In addition, there are files containing legal papers on his mother, Perouz Boyadjian, his brother Angelo, and his sister Alice.

This series contains correspondence, advertisements, and articles about Van-Leo’s exhibitions to include those held at venues like the Pruszkowski Studio, Paris, 1986 (this exhibit a joint show of both Angelo who is in Paris and Van-Leo); the French Cultural Center, Alexandria, 1989;  Galerie Scalo, Zurich, 1993; Institut du Monde Arab, Paris, 1995;  L’hotel de Sully, Paris, 1996; American University in Cairo Sony Gallery, 1996 and 1998;  American University in Cairo’s Rare Books Library, 2002.  Correspondence shows Van-Leo’s frustration with sponsors and his growing sophistication in the stipulations he sets down for would-be sponsors.

Also included here is correspondence in regard to the publication of Portraits of Glamour in 1997, and that of lesser inclusions of his photographs in books.  This series also contains Van Leo’s collection of announcements and news clippings for other cultural events, mainly in Cairo and Alexandria, and largely sponsored by the Swiss Embassy or the Townhouse Gallery.  One announcement promotes the joint 1995 Theatre Lisieux exhibition of photographer Katia-Christine Boyadjian (his great-niece and Angelo’s granddaughter) and her husband Daniel Jure, a painter.

Magazine and Newspaper Clippings: Articles about Photography and Photographers

Magazine and Newspaper Clippings: Articles about Van-Leo and Angelo, Examples of their Work

Van-Leo and his brother Angelo are the subjects of clippings contained in this series.

Clippings from magazines and newspapers with portraits and images of women are contained in this grouping.

This series contains cinema magazines dating from 1930 to 1950.  Most of the magazines included in this series are represented by between one and three issues, with fuller but incomplete runs for Picture Show (1930), Picturegoer (1935-1941), and Paris Hollywood (circa 1948 to circa 1950).  The latter contains pin-up-style nude photographs.  The magazines are organized alphabetically by title, with the exception of one folder containing clippings from various magazines and three bound volumes which contain issues of multiple magazines.

This series includes three stamp albums containing stamps from all over the world.  There appears to be little organization to any of the albums, neither by country or region of origin nor by topic.  Most stamps are canceled, some probably taken from letters Leon had received, as the stamps had been clipped from many envelopes found within the collection 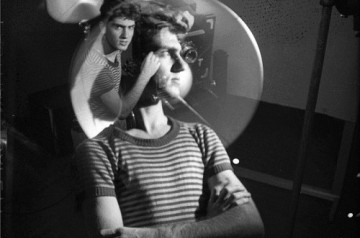 On the occasion of what would have been his 100th birthday, Van Leo’s legacy is celebrated this year with a season-long extended exhibition displaying a rare selection from the Pandora box of the Rare Books and Special Collections Library and hosted by the Future Gallery in the Tahrir Cultural Center (TCC), AUC. The exhibit features more than 150 photographs, including some of his iconic portraits and never seen ones before.