The AUC Libraries newsletter brings you the latest news about Library events, new resources, rare collections as well as physical and virtual services to support your academic endeavor and learning experience. 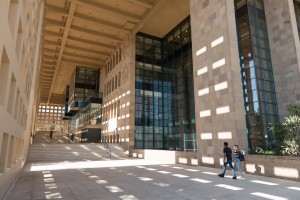 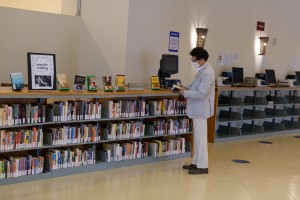 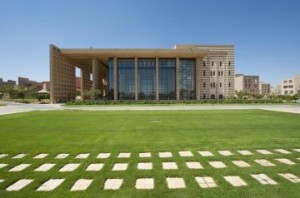 UNESCO/Jijki Memory of the World Prize 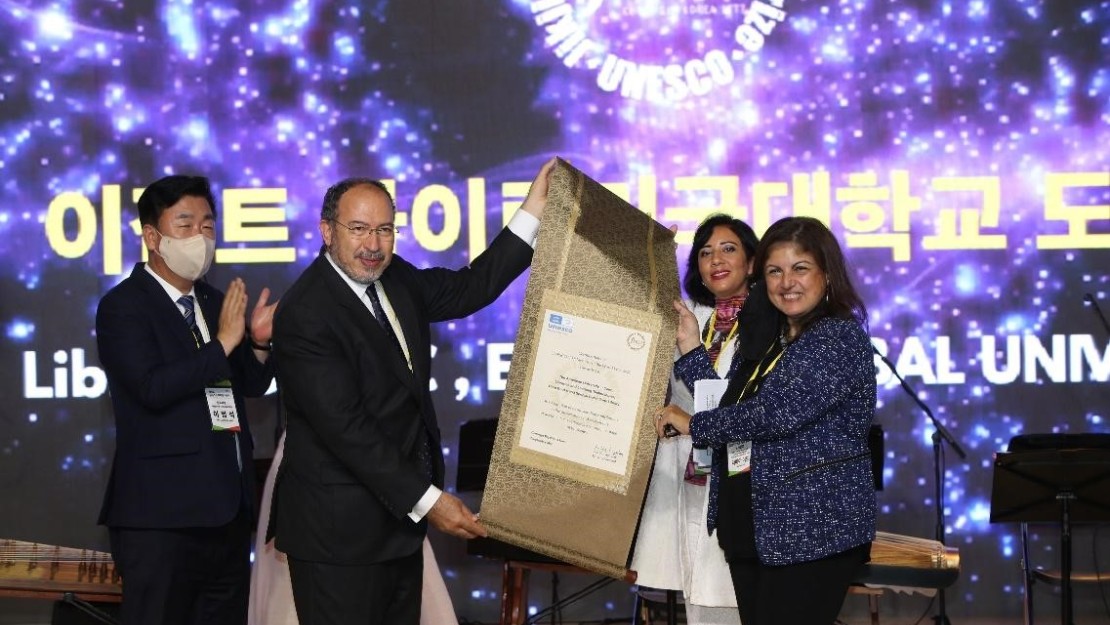 Following the recommendation of an international jury of experts who reviewed 55 nominations from 41 countries, The American University in Cairo's (AUC) Libraries and Learning Technologies (LLT) was unanimously selected as the winner of the 2022 UNESCO/Jikji Memory of the World Prize for the efforts of the Rare Books and Special Collections Library (RBSCL) in preserving documentary heritage.

For decades the RBSCL has been collecting and preserving collections in various formats, such as archival documents, books and magazines, photographs, maps, architectural plans, drawings, audiovisual media and so on. Built on the personal library of Islamic art and architecture scholar and photographer K.A.C. Creswell, RBSCL has become the steward for collections of major figures in Egyptian society, culture, and the arts, including pioneering feminist Huda Sharaawi, renowned architect Hassan Fathy, and art photographer Van-Leo. The prize also recognizes RBSCL for making these resources accessible to the AUC community and researchers worldwide, including through its digital initiatives.

The prize was created in 2004 to commemorate the inscription of the Buljo jikji simche yojeol — the oldest known book printed using moveable metal type in the world — on the Memory of the World International Register. This $30,000 award is given every two years to honor an individual or institution for their contributions toward preserving and making accessible recorded history, known as documentary heritage, which is the quintessential function of the RBSCL at AUC.

Reflections about the RBSCL Award

The Rare Books and Special Collections Library is a powerful testament to how well-preserved, accessible documentary heritage can become a wellspring for understanding history and culture across regions. I congratulate them on winning this prize.

This appreciates the library’s efforts to preserve the Egyptian and Arab documentary heritage, support researchers with high standards, and communicate with entire communities and regions through various activities and projects. 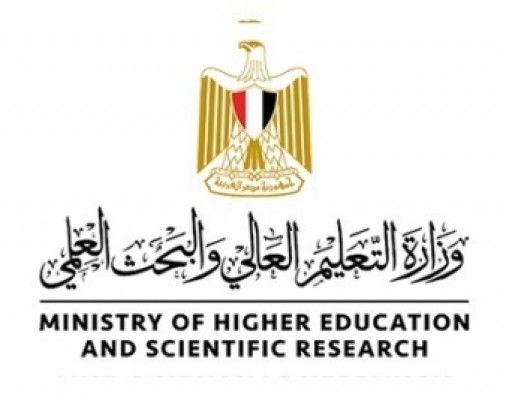 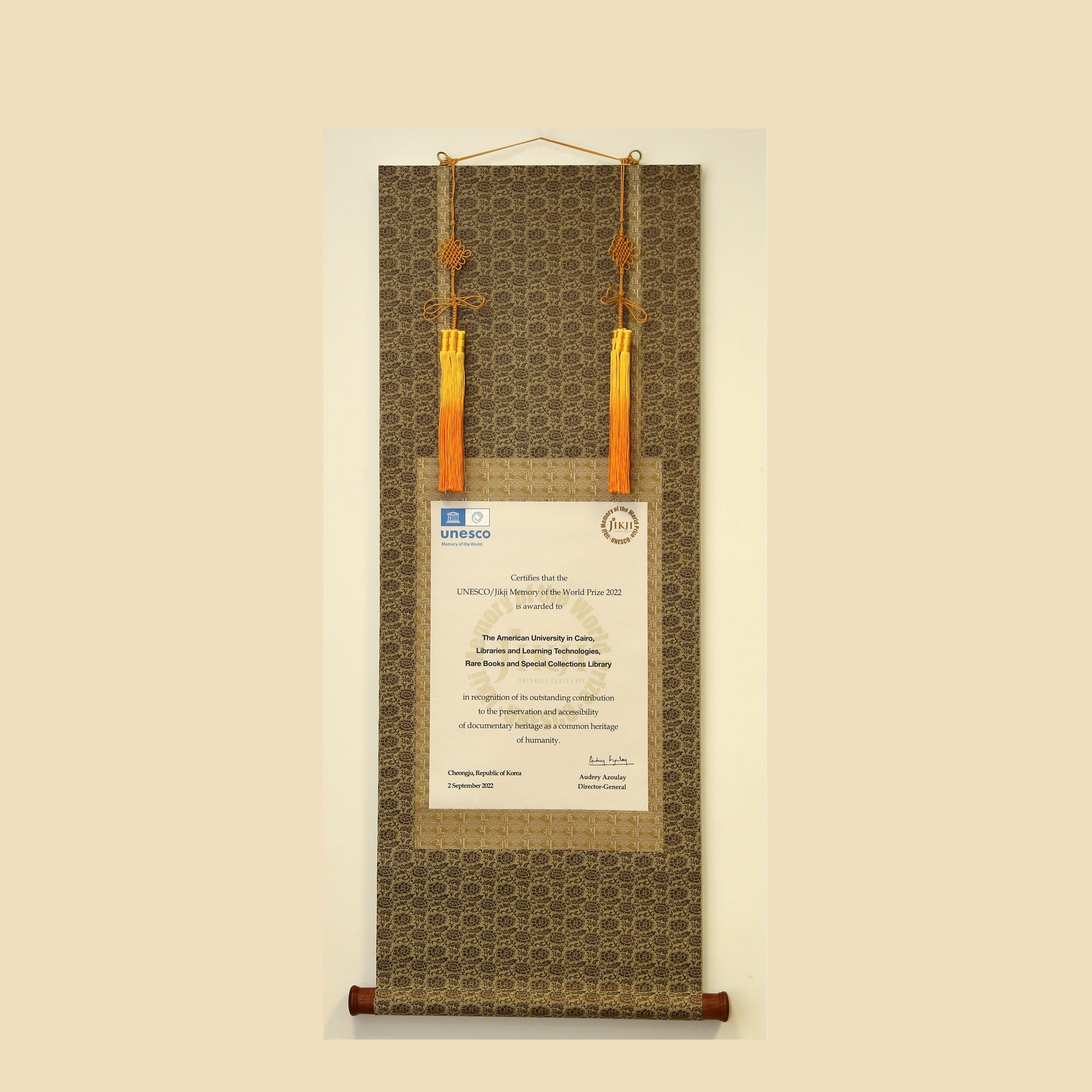 "Receiving the UNESCO Jikji prize highlights the spirit of teamwork that's at the heart of AUC Libraries and Learning Technologies-RBSCL. This recognition was made possible through the efforts of our current and past librarians, staff, leaders, support from the AUC community and partners beyond the university like donors and researchers, who all make it possible to preserve and celebrate the documentary heritage of Egypt and the wider region."

"We, the AUC library, realize the value of preserving resources and collections and continuously strive to make these works accessible. We are committed to collecting, preserving and digitizing historical and rare material and are excited about technology's prospects.”

“The Jikji Prize will certainly put AUC and its RBSCL in the limelight helping make the numerous special collections better known to attract scholars, researchers, and the public to its impressive assets.” 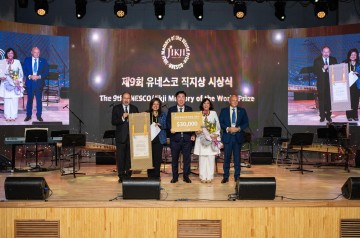 In the presence of the Egyptian Ambassador to the Republic of South Korea, Khaled Abdel Rahman, Mayor of Cheongju City and UNESCO Deputy Director, the AUC Libraries delegation received the prize at a prestigious ceremony held on September 2, 2022, during the 30th-anniversary celebration of UNESCO’s Memory of the World Programme, at Cheongju city in South Korea.

Click here to watch the UNESCO/Jikji Memory of the World Prize.